Perhaps the most omnipresent of technologies in the Popol Wuj, the blowgun – wub’ – plays a significant role in the tale.  At nearly every turn in the Hero Twins’ story, blowguns have a central part in the events, or it is at least noted that they would go “with their blowguns over their shoulders” (ki wub' xkitelej).

Blowguns enable Juajpu and Xb’alanke to provide for their family; they allow the Hero Twins to defeat Wuqub’ Kaqix; one even provides them refuge in the House of Bats (Casa de Murciélagos), sheltering them from danger for the night. As the names Junajpu (hunter) and Xb’alanke (predatory animal jaguar) suggest, hunting and the use of the blowgun seem to be a divine calling for the boys, as it was for their fathers before them.

For example, when Wuqub’ Kaqix is defeated using the blowgun, it is said: "Xa u tzij ri u K’u’x Kaj/ Ta xkib’ano (they merely accomplished the word of Heart of Sky)."

The deities are pleased with the Twins’ use of the wub’ to put Wuqub’ Kaqix in his place in response to his haughtiness. The blowgun also comes in handy when receiving messages from the wok (falcon), carrying layers of animal messengers in his stomach, is brought down by the wub’ and able to relay information from the underworld. 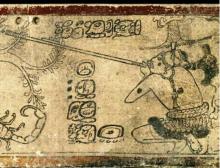