The black path ("camino negro" or "queca be," in Ximénez's script) is one of the four cosmic routes of the universe ("cahib be"); along with the red path ("camino rojo" or "ꜫaꜫabe"), white path ("camino blanco" or "zaqui be") and yellow path ("camino amarillo" or "cut eana be"), these routes represent the spiritual pathways and cardinal points of the K'iche' cosmovisión (14r). In this tradition, the color black represents danger (Ajpub' Pablo García Ixmatá 2010: 227).

Each physical route at the cross-roads ("cruzíjada" or "pacahib xalcat be") leads to a different spiritual path, one that is brought into order by a particular divine force. The four-part division into the cardinal points reflects the four "cornerings," "sidings," "measurings," and "stakings" of the world, as understood in Maya cosmology as an act of creation, or coming into being. For example, the opening lines of the Popol Wuj use parallel structure to describe the four corners of the earth. Allen Christenson notes that the balanced quatrain's "four-fold symmetry" might be one way in which the aesthetics of the text mirror "the four-fold nature of the universe" (Literal Poetic Translation, fn10p15). The key lines are, in Christenson, "Its four cornerings, / Its four sidings, / Its measurings, / Its four stakings", ll. 66-69.

In this way, each cardinal direction is linked to specific color symbolisms, such that color serves as a mechanism through which Maya speakers situate themselves in geographic or physical space and connect with the spirit world of the nawales (May K’iche’ Winaq B’elejeb’ Aj | unión de escritores mayas, Raxalaj mayab' k'aslemalil | Cosmovisión maya, plenitud de la vida, esp. 30-33).

According to Alexandre Tokovinine (2012: 283), in addition to these four main color vocabularies, there are also, among many Lowland Mayan languages, "single words with non-color primary meaning and compounds with basic color terms," both of which use what R.W. Casson calls "metonymic innovation" to convey specific ideas about color properties (R.W. Casson, "Russet, Rose, and Raspberry: The Development of English Secondary Color Terms," Journal of Linguistic Anthropology 4: 5-22). In other words, speakers of these Mayan languages define terms like soot (or sib'ik in Maya Ch'orti') as "purple," "dark blue," and "black" (citing C. Wisdom, Materials on the Chorti Language. University of Chicago Library, Chicago, 1950:635). Likewise, Maya Yukateko has two words for forms of indigo, b'oox, which also means "black," and ch'doh, which also means "blue" (citing Victoria Bricker, "Color and Texture in the Maya Language of Yucatan," Anthropological Linguistics 41 (3): 283-307, p. 284). See also Houston et al., Veiled Brightness: A History of Ancient Maya Color, Austin: University of Texas Press, 1999: 20-24).

Mayan writing systems are complex and diverse, and colors do not appear in a fixed or rigid order (Houston et al., Veiled Brightness, 1999: 28). Nevertheless, some associations persist between color names and spatial-temporal orientations. The color black, written as ink', ik' or ek' in classic-era and colonial Maya Yukateko, and as éek' today, is associated with the west. Within a month-long count, the color black aligned with the months Uo and Ch'en, broken up by the color red, symbolized by the month Zip (Houston et al., Veiled Brightness, 1999: 27).

Unlike some of the color color-cardinal points, ihk', the logogram or word sign that signifies "black," as Tokovinine (2012: 286) writes, is also essentially a representation of the color itself as a spot of blackness" (citing Stephen Houston et al., Veiled Brightness, 34-35). In some iconographic traditions, such as those studied by Houston et al., the graphic-word symbol for "black" seems to refer to caves, or dark underground spaces. In other cases, such as the glyphs studied by David Stuart at Palenque's Temple XIX, the writing has gone undeciphered. Tokovinine (2012: 286) thus concludes, "significance of the logogram for the color black extends beyond the notion of color into a broader range of meanings that includes hollow objects."

This symbolic understanding of ihk' as the color of caves and underground laberinths may explain why it is the camino negro that leads to Xibalba, home of the Lords of the Underworld. As Allen Christenson explains (2007: note 258, page 109), "the brothers were tricked into following the black, or west, road—a premonition of their defeat and death since this is the road that the sun takes when its sinks into the underworld." 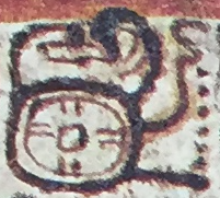