When the Hero Twins first arrive at the crossroads of Xilbaba, they face four possible paths: the red way, black way, white way, and yellow way. In Maya cosmovision, the color red represents power and authority (Ajpub' Pablo García Ixmatá 2010: 227). For his part, Ximénez calls them, in colonial K'iche', "hun ꜫaꜫabe, hun cut queca be, zaqui be hun, hun cut eana be cahib be" (14r); he translates these names straightforwardly into Spanish as "camino rojo," "camino negro," "camino blanco," and "camino amarillo." When the twins emerge from Xibalba, the "camino amarillo" (yellow road/cahib be) becomes a "camino verde" (green road/raxa be), indicating an important relationship between color, space, and time (23v).

Each physical route at the cross-roads leads to a different spiritual path, one that is brought into order by a particular divine force. The four-part division into the cardinal points reflects the four "cornerings," "sidings," "measurings," and "stakings" of the world, as understood in Maya cosmology as an act of creation, or coming into being. For example, the opening lines of the Popol Wuj use parallel structure to describe the four corners of the earth. Allen Christenson notes that the balanced quatrain's "four-fold symmetry" might be one way in which the aesthetics of the text mirror "the four-fold nature of the universe" (Literal Poetic Translation, fn10p15). The key lines are, in Christenson, "Its four cornerings, / Its four sidings, / Its measurings, / Its four stakings", ll. 66-69.

Each cardinal direction is linked to specific color symbolisms, such that color serves as a mechanism through which Maya speakers situate themselves in geographic or physical space and connect with the spirit world of the nawales (May K’iche’ Winaq B’elejeb’ Aj | unión de escritores mayas, Raxalaj mayab' k'aslemalil | Cosmovisión maya, plenitud de la vida, esp. 30-33).

This should not suggest, however, that there is an always-fixed or rigid order of associations; rather, there are general patterns that repeat themselves across diverse and complex writing systems of the Maya world (Houston et al., Veiled Brightness, 1999: 28). For example, the color red (written as "kaq" in modern K'iche', and as "chak" in modern Yukatekan), is associated with the east. In hieroglyphic writing, the glyph for "east" ("este" in Spanish, and "elk'in" or "elk'inh" in Classic and colonial-era Yukatek spelling, and written as "lak'iin" today) includes a signifier that we also find in the glyph for the god Chak. On the use of Yukatekan in hieroglphyic writing systems, see Macri and Looper, New Catalog of Maya Hieroglyphs, and Johnson, Translating Maya Hieroglyphs.

As various scholars have argued, adding the word "red" to the name of a plant or animal does not necessarily mean that the being has "red" properties (see for instance Houston et al., Veiled Brightness, 21; cited in Tokovinine, "Writing color," 286). Instead, the presence of color (literally, "colorado," in Spanish, often translated as "red," in ways that are correct and incorrect) maps onto specific objects and symbolic associations. In the case of "red" (chak), we find glyphs that link blood, Chak, and nobility. An inscription in Copán (Altar U: K4-5; Stela 8: D4-5), shows a queen's name that is written as "Chak [5993 | unknown]-ki ye xook ki," or "the tooth of the shark, Chak [5993 | unknown]" (Tokovinine, "Writing color," 286). Tokovinine suggests that the undeciphered glyph may represent a fish spine, often used in bloodletting ceremonies; this association would preserve the symbolic link between red hue, the Chak god, and royal ritual (Tokovinine, "Writing color," 288).

In addition to blood, the color red is linked to heat, in a broad symbolic web that includes fire, lightning, and the sun; such meanings extend to rain (both because storm clouds are linked to lightning and because the rains often come from the east in Yucatán), and to flowers. The objects themselves are usually colored yellow (k'an), but they share graphic markings of "chak," perhaps referring to prestige or greatness, as in the expression of "chak ch'ok," a man who has accomplished much in his young life (Tokovinine, "Writing color," 291). The camino rojo could convey all of these significations -- east, heat, and blood, and, thus, fertility, sexuality, and noble ceremonies of succession that involved both life-giving and life-taking elements.

Colonial writers misunderstood these color properties not only because they tried to read color within their own conceptual frameworks, but also because they misunderstood the ways in which Mayan speakers orient themselves in space. On Spanish maps, "north" is often found at the top, perhaps reflecting the navigational or maritime origins of maps that both directed transoceanic ships and were created in response to new imperial crossings (see for instance Monardes 1574: 166-166v).

But as Amara Solari has convincingly shown, Mayan cartography used circular models of space and time before and after the Spanish conquest. These round maps often placed "east" at the top of the wheel, perhaps reflecting agricultural orientations toward the rising of the sun (Solari, "Circles of Creation"). In a k'atun wheel from the Chilam Balam de Chumayel, for instance, "lak'in" or "east" is placed at the top of the circle. Spanish writers conflated "east" and "north," because they assumed that "north" would be at the top of the wheel.

As such, the "camino rojo" or "ꜫaꜫabe/kaq bej" of the Popol Wuj is tied to physical geographies, such as eastward-facing paths along which Maya people exchanged goods, services, and ideas with other Mesoamerican communities, as well as spiritual routes that connected the living and the created with the spirit worlds of ancestors and creators. 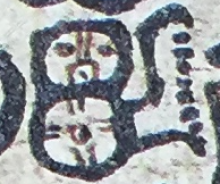